the diary of a self-confessed millenial 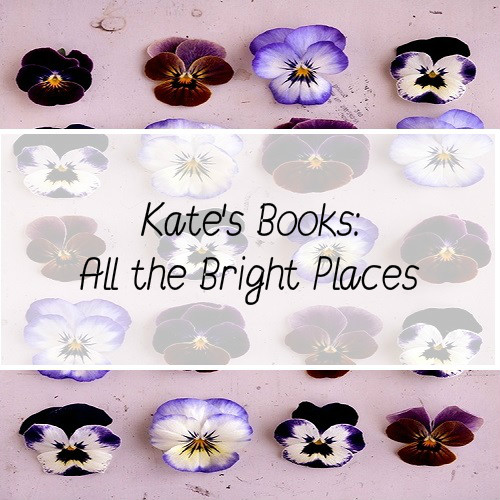 So it’s been a while since I’ve posted an individual review (see my last one here). It’s not that I haven’t read any particularly worthwhile books lately – it’s just that I have an insane backlog of book reviews to get on. September and October were really bad months for my tbr (see a full list here) and I read absolutely nothing at all. So I’m more or less devouring everything I can get my hands on for November, which, as you can imagine, has pretty much left me scrabbling to catch up on all my reviews. Jfc I am a terrible book blogger.

I picked up All the Bright Places on the recommendation of a friend. In hindsight, I probably shouldn’t have listened to her, because this is someone who thinks The Fault In Our Stars was brilliant and John Green is the pinnacle of human evolution. Nevertheless, I had space in my “4 books a month” quota for one more, so I went ahead and bought a copy. Biggest regret of November 2016. I could’ve bought two caramel macchiatos with the money I spent on that book.

Brace yourselves, guys, gals, and non-binary pals, for the first ever Kate’s Books post to review…a book I did not like.

But first, a few warnings! 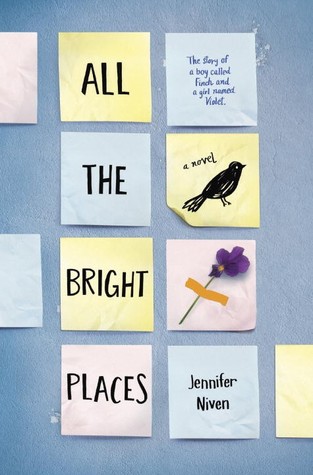 Violet Markey was once a straight-A student, an avid writer, popular at school, but her life comes screeching to a halt when her beloved sister dies in a car accident. Standing on the edge of the bell tower in school, she comes across the school “freak”, Theodore Finch.

At first, Violet thinks nothing of the strange boy who talked her down, but then the two are paired for a school project on the “natural wonders” of their state. They wander around Indiana, visiting weird, random roadside attractions and slowly beginning to open up to each other. Violet discovers a Finch utterly different from the image he projects in school, and Finch begins to break the wall erected around Violet’s heart.

Their wanderings come to mean more than just a school project. Violet learns to stop counting the days and start living them, and slowly finds herself falling for Finch. However as her world begins to grow, Finch’s begins to shrink.

Before I start in on my usual bullet point format of my book reviews, I’d just like to say that my dislike of this book stems from just one major point: Jennifer Niven totally and utterly fails to deliver on her portrayal of mental illness.

Disclaimer: A lot of my misgivings about this book’s handling of mental illness are based on my own experiences with a very close friend’s mental illness. This girl and I grew up together, and shortly after her mother passed away, she tried to commit suicide. I was the one who found her and rushed her to the ER. This was about three years ago, and since then, me and a couple other girls from our friend group have been in charge of our friend’s maintenance (helping her with stuff like follow-up appointments with her psychiatrists, keeping track of her medication, etc.). She’s doing much better now, but the past three years have been pretty much a “baptism by fire” type deal regarding therapy and psychiatric help for me. Nevertheless, I am not an expert on mental health and do not claim to be one. Take everything I say with a grain of salt.

2/5. Good writing, terrible handling of the subject matter. If you suffer from a mental illness yourself, please, please, please tread cautiously if you decide to read this book.

4 thoughts on “Kate’s Books: All the Bright Places”

My name is Kate, and this is my blog.

Here, I write about the daily #adulting struggles, the thoughts that keep me up late at night, and balancing a full-time job with grad school. If you're into battling daily existential crises and/or getting your schadenfraude kicks by watching a twenty-something struggling through life, this is the place to be.

I'm 24, an ENTP, and a Virgo. I like dark lipstick, traveling and hiking, Spanish poetry, and getting into online fights about intersectional feminism.